This syndrome effects the wrists and fingers. Turkish form of the carpal tunnel syndrome is Wrist Channel and is called as nerve comprassion. There are 9 tunnels containing the nerves  in the wrists enabling the fingers to move. Median nerves get under presuure and this illness blows out.

Symptoms of the Carpal Tunnesl Syndrome

This is an issue of the wrists , however , it mostly affects the fingers. Generellay, it shows itself as numbness, piss and needles, insensibility and pain on the first 3 fingers. . These pains can be as serios as awaking the patients at nights. The pain increases as the patients use his hand more so that he feels the pain while resting.

Everybody can have the carpal tunnel syndrome but the women over 40 years and older are more likely to have the syndrome, however, a considerable amount of young men have this problem. Pregnants do have this problem as well but the reason behind it is a change with hormones. Yet, possibility for the pregnants end as the birth takes place. People who use their hands and wrists more than normal are under risk as well. Additionally, people who work with computers and keybords, do houseworks and handworks and who are working as carpenters and repairman can be counted in this group.

A precise treatment of the carpal tunnel syndrome is a surgical operation. On the other hand, nonsurgical treatments can be tested in case of a slight level and early stages of the illness.

Two of the most significant methods of the nonsurgical methods are exercise and splint. The splint can fix the wrist. And a couple of exercise methods can increase the slipperiness of the tendons. However, most of the patients do have a surgery despite the exercise and split.

In the surgery, a tissue covering the narrow carpal tunnel and pressing by getting harder is loosened. So volume of the tunnel enlarges. Thus pressure of the nerve gets off. As a result, the definite treatment of the carpal tunnel is the surgery. The patients should have the surgery befor it is too later.

Doç. Dr. Ata Can was born in Iran, in 1973.  He has completed his primary and secondary educations in Iran. He was graduated from Pertevniyal High School in 1996.  He has completed medical education at Dokuz Eylul University Medical Faculty, Izmır, 1996.

He has completed his orthopedy and  traumatology  speciality with a thesis named Child Nip Breakages at Cerrahpaşa Medical Faculty, 2001. 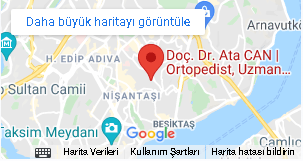